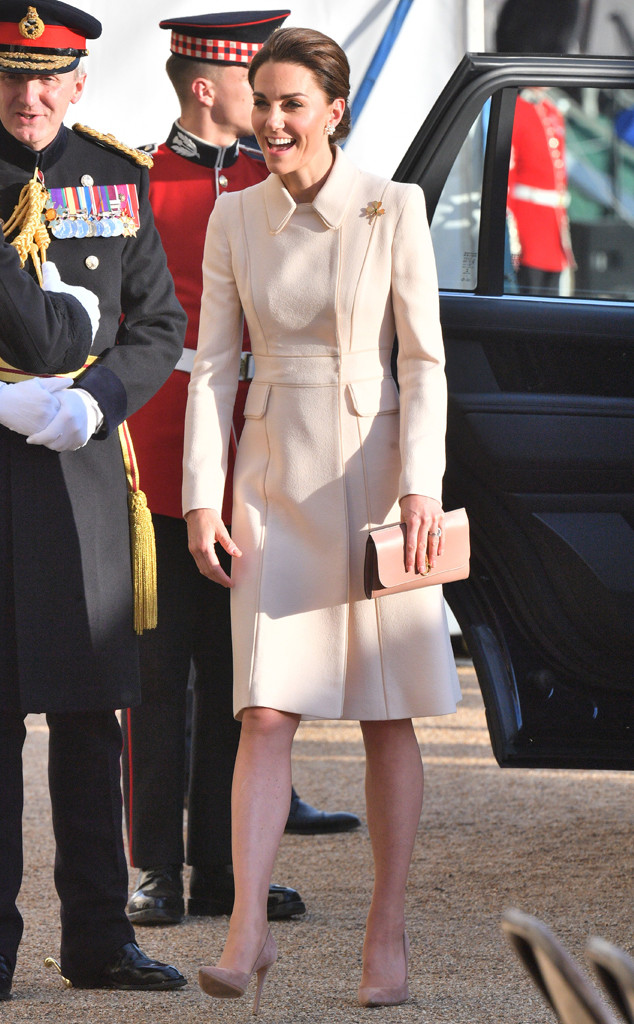 Kate Middleton is stepping up to the plate in the Queen’s absence.

For the first time in her position, the Duchess of Cambridge was saluted by the troops at the annual Beating the Retreat musical event. Typically, this honor is reserved for Queen Elizabeth II, but Kate was saluted as she was the sole member of the Royal Family to attend.

Soldiers saluted the Duchess, who was wearing a Catherine Walker coat, Gianvito Rossi pumps, Cassandra Goad earrings and the Irish Guards gold shamrock pin. She perfectly accessorized the ensemble with a Mulberry clutch. As for her hair, the mother-of-three had her hair elegantly pulled back into a slick chignon.

The event was held to showcase the British Army, but also included a tribute to the 75th anniversary of D-Day. Her husband, Prince William, attended an earlier event commemorating the Allied invasion of Normandy.

This is just one of the numerous events that the Duchess has attended this week. At the beginning of the week, William and Kate joined the rest of the royal family, except for Meghan Markleand Prince Harry, to host the American First Family. The Duke and Duchess of Cambridge were just one of the many couples who entertained President Donald Trump and his adult children at a state banquet at Buckingham Palace.

And there are plenty more appearances in the coming weeks! With the Queen’s birthday around the corner, there are ton of fun events planned, including the Trooping of the Colours, which Meghan Markle is planning to attend, despite her maternity leave.

So get your tea and biscuits ready for a proper British celebration!