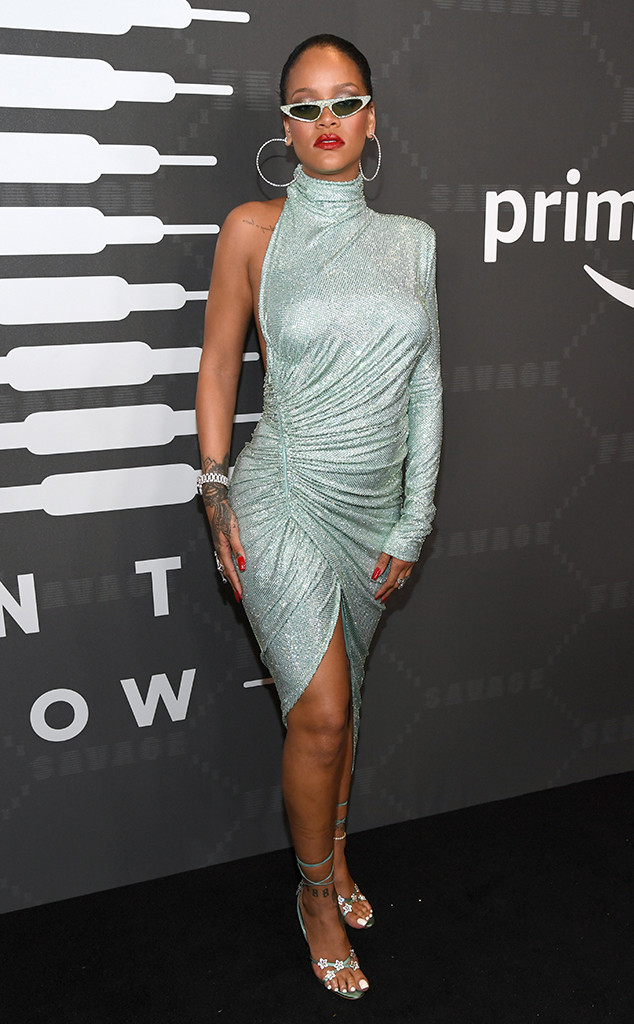 Rihanna is putting in that “work, work, work” during Fashion Week.

After showcasing Savage X Fenty’s latest lingerie collection on Tuesday night for New York Fashion Week, the 31-year-old designer and beauty mogul shut it down. While fans of the star will have to wait until Sept. 20 to see the runway in all its glory on Amazon Prime Video, E! News caught up with bad gal RiRi after her “phenomenal” night.

Naturally, she lit up the red carpet with a shimmery turquoise dress that hugged all of her curves. Complementing her stylish design, she threw on jewel-adorned sunglasses, a red-hot lip and Tiffany blue strappy sandals. It was clear the Fenty Beauty founder oozed with confidence last night. However, she let us in on a little secret for those days when she’s not feeling herself.

“Pretend,” she told E! News. “I mean, it’s either that or cry myself to sleep. Who wants to do that? You wake up with puffy eyes the next day, it’s a waste of tears.”

If that trick works for Rihanna, then you bet your bottom dollar we’re showing off our best acting skills on those days when we’re feeling insecure.

During her Savage x Fenty runway, the 31-year-old singer took to the stage for the star-studded crowd, which included celeb guests Kehlani, Big Sean, Kacey Musgravesand many more. However, Rihanna admitted she was a bit nervous about her performance, but we’re sure no one noticed.

“I was literally about to throw up and I’ve never said that in my life, because I don’t say that unless I mean it,” she shared with us. “But I was walking off stage like [motions to throwing up]. I was so nervous, I was so nervous.”

She continued, “Tonight was phenomenal, everyone is so great. This was a great show. I didn’t even realize that people would be intimidated by the environment.”

“I just thought these people would come in and be like, ‘Fine’ and I’m the one that’s nervous but everyone felt the presence of the room,” the fashion designer said. “I was so appreciative of everyone being apart of it.”

To see the one and the only RiRi chat about her latest collection, as well as dish about sisters Bella Hadid and Gigi Hadid hitting her catwalk, watch our video clip above.