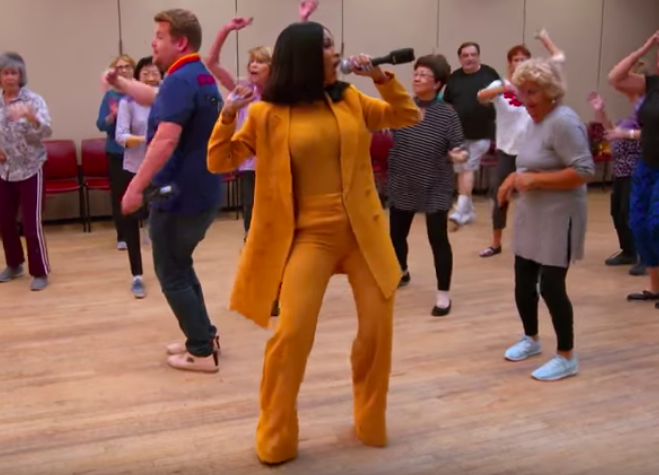 Cardi B joined James Corden on a segment of Carpool Karaoke that tested the limits of how much you can swear on a late night show. The rapper, clad head-to-toe in yellow  in honor of the song that started it all, “Bodak Yellow,” which was the first of many Invasion of Privacy hits they performed.

“At first people didn’t want to play my music on the damn radio,” Cardi said, telling Corden how ‘Bodak’ was the result of years of hustling and hard work. “A Lot of these DJs was sleeping on me … So I had to keep on making music until I find the right one that’s gonna make them catch their eyes on me.”

While the duo were singing Cardi’s latest hit, “Money,” the rapper stuck her head out of the window, yelling lyrics and shouting at people walking down the street. “Good morning, bitch!” she yells. “What’s up children,” she adds to a group of kids at a playground. “Stay in school! Listen to your mom!”

All the driving around eventually brings the duo to the paradox of Cardi B’s car collection. She owns five luxury cars (“I have a Lambo, a Lamborghini truck, a Bentley truck, a Maybach and a Suburban,” says said) but does not know how to drive. Corden takes the rapper to a parking lot for a driving lesson, which, spoiler alert, doesn’t go well. Corden is befuddled as Cardi mows down street cones, flags and rear-ends the Range Rover.

What does go well is when Cardi and Corden send a senior citizens’ dance class in a salsa frenzy with “I Like It.” The rapper performed one of her biggest hits from the floor, dancing with all the seniors. One elderly gentleman appeared smitten with the rapper. “I’m very pleased to meet you,” he said while dancing with Cardi. “Are you looking for a significant other? Are you available?” The shocked singer replies, “Uh, sure.”

“That was a great success,” Corden proclaimed as they left. “I got us a whole new fanbase.”