Home Music News Flashback: Neil Young and Phish Play an Epic, Weed-Fueled ‘Down by the... 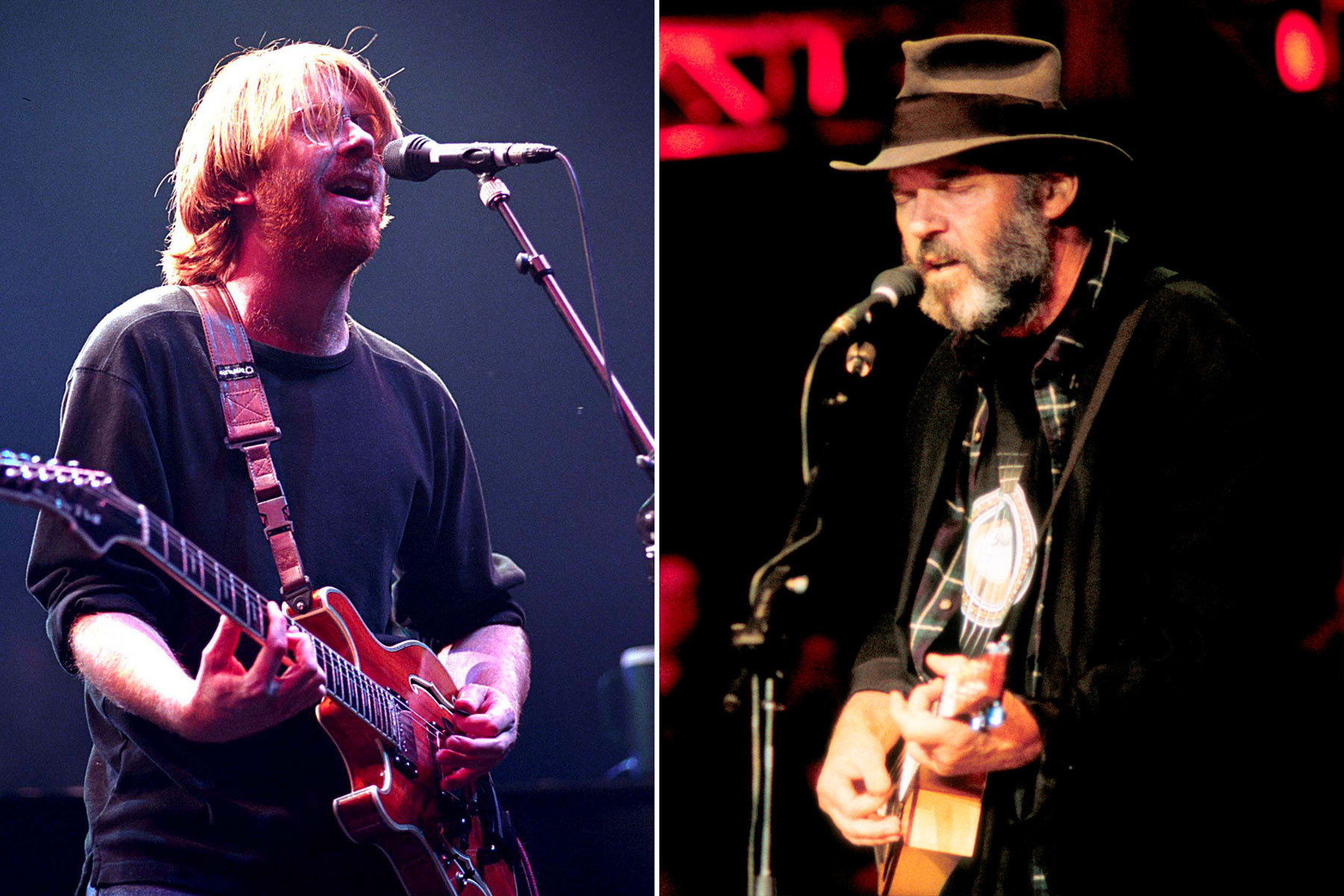 Phish have been dropping Neil Young covers into their live set ever since they first played “Cinnamon Girl” at Gallagher’s Bar & Grill in their native Vermont back in 1989. Over the years, they added “Albuquerque” and “Come On Baby Let’s Go Downtown” into the mix, but they never got a chance to hang with him until they showed up at the New World Music Theatre in Tinley Park, Illinois, for Farm Aid on October 3rd, 1998.

It was an overwhelming day for Trey Anastasio that’s forever burned in his brain. It began when he got the chance to go onto Willie Nelson’s bus where they got “obliterated” on weed and made plans to perform “Moonlight in Vermont” together. “I’m like, crippled,” he told the crowd at a Nashville concert in 2019, “trying to get off the bus, trying to find the door. ‘Ok. ‘Moonlight In Vermont …’ I gotta learn this song, learn the chords.’”

He then walked over to Neil Young’s bus and found that Woody Harrelson was there too. “So there I get high on Neil’s bus,” he said. “Now I’m getting more crippled.” But despite being stoned out of his mind, he managed to make plans to bring Young out during Phish’s set later in the day so they could play “Powderfinger” together. “I start walking off the bus,” Anastasio says, “and just as I’m walking off, Neil says, ‘You know, I don’t like to … I’m not that good at plannin’ stuff.’”

They learned what he meant when they watched his set from the side of the stage and he closed it out with “Powderfinger.” Anastasio took that as a sign that Young had changed his mind about a jam, but midway through Phish’s set he heard someone else start playing guitar.

“I turn around, and Neil had heard this jam and was kinda really into it and was like, ‘Wow, that’s a cool jam,’” he said. “He just walked out onstage behind me and picked up my spare guitar and plugged it into the amp and just started rocking out on whatever we were doing. And I think we went into ‘Down by the River,’ or something; we just made something up.”

They not only went into “Down by the River,” but they played it for nearly 20 minutes. Phish had never played the song before and the entire show was airing live on CMT. “Everybody’s standing over at the side, and he started kinda getting mad because this was going on for a long time,” he said. “We were supposed to stop. This is, like, a TV show, you know? Anyway, what did I learn from that? Never plan anything.” (Check out the entire glorious performance right here.)

Two weeks later, Phish played Young’s Bridge School Benefit where they teamed up for “Harry Hood” and “Helpless.” Once again, it was a perfect merging of jam worlds. Unfortunately, for whatever reason, they have not shared the stage since that night. But in 2017, Phish finally found a chance to play “Powderfinger” when it was “powdered donut” night during their Madison Square Garden Baker’s Dozen residency. Better late than never.