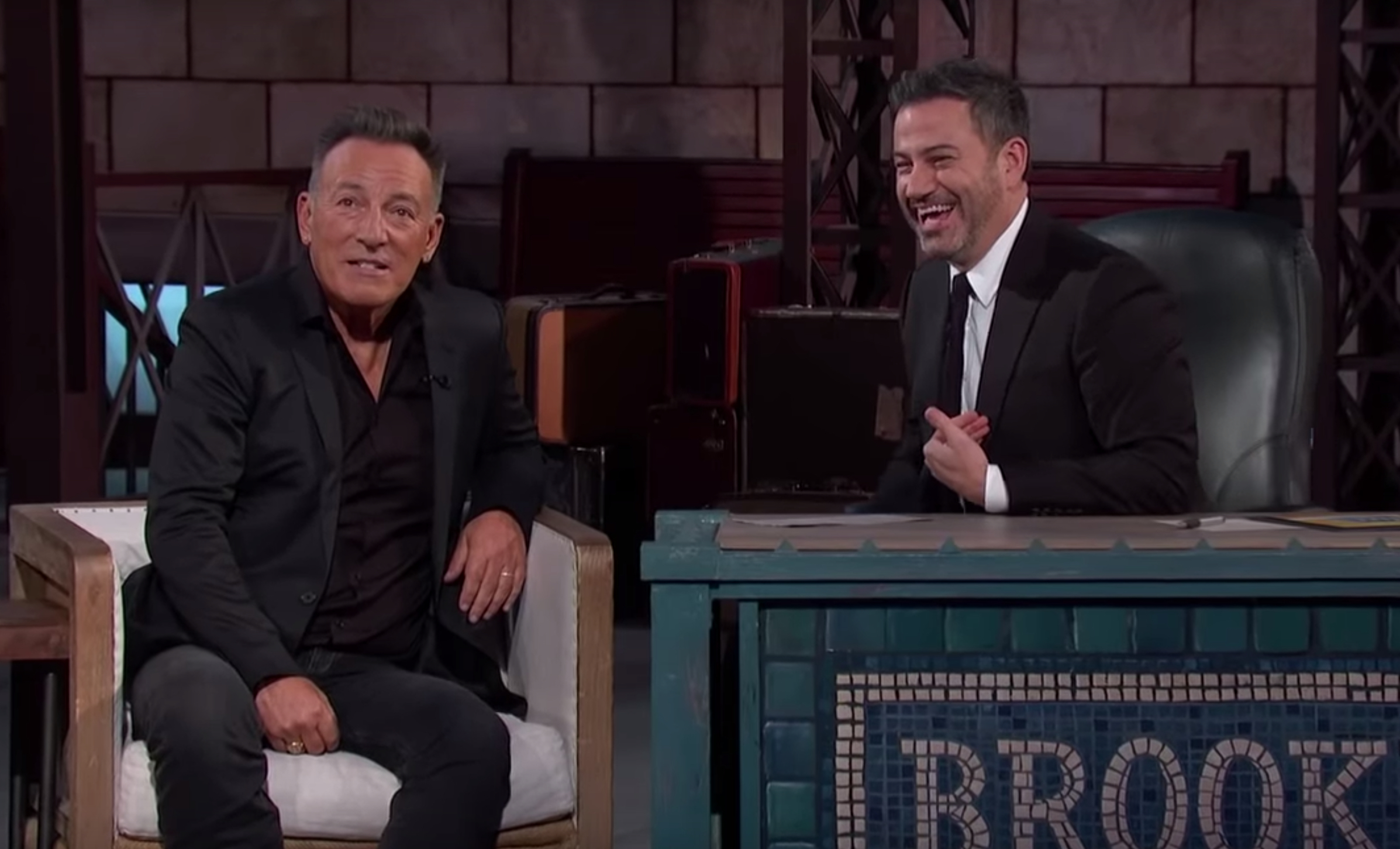 Bruce Springsteen is not the first guitar player in his lineage. The singer recently visited “Springsteen: His Hometown,” an exhibit at the Monmouth County Historical Association in Freehold, New Jersey, dedicated to, well, him. The exhibit traces his family all the way back to the Civil War.

“The most interesting thing is they had a small parlor guitar, which is what people played in those days, a small guitar,” Springsteen told Jimmy Kimmel Monday night on Jimmy Kimmel Live. The instrument apparently belonged to one of his relatives from the 1800s. “So, I’m not the first guitar player in the Springsteens,” he added.

While he said he is frequently seen in his hometown, Springsteen recently surprised fans at a screening of his movie, Western Stars, in Freehold. The film, co-directed by Springsteen and Thom Zimny, features home movie footage shot by Springsteen, including scenes from his honeymoon with wife Patti Sciafla.

Kimmel wondered if Springsteen’s children were into the home movie footage and seeing him cheered on during concerts. “Kids don’t want to go anywhere and see 50,000 people cheering for their parents. They would like to see 50,000 people boo their parents,” the musician said with a laugh. “Our kids have been relatively uninterested in the job that I’ve done their entire lives.”

In the film, Springsteen brings up “living in good faith,” which Kimmel asked Springsteen to expand upon. “Maybe it means something different to everybody,” he explained. “For me, it’s just trying to stay on a straight, straight track and with honest transactions between the people that I care about and the people that I meet every day.

“But it can take you a while to get there, I mean the film is basically about the journey that everybody takes in their definitions of freedom,” he continued. “When you’re young, it’s all about going where I want to go, doing what I want to do, I’m going to be who I want to be, and that’s OK for your twenties. But somewhere in your thirties, it starts to catch up with you and your definition of freedom has to expand to include family, your civic life, you know, community that you’re involved in. And if it doesn’t, you’re kind of, you get stuck out in the cold you know? Really out in the cold.”

He added that his job can also stunt that kind of growth. “I mean what I do, they still call ‘playing.’ You know? It’s not really called working, it’s called playing. So that journey, I think for people maybe in the arts, period, certainly in the music business, it can be a bit of a go.”

Springsteen also spoke of moving back to New Jersey in the mid-Nineties to help ground his kids. “We had a 80-member Italian-Irish family, and that was the way that I grew up, so I wanted my kids to have that sense of a bigger world than the entertainment world. I wanted them to see people that did a lot of other things, be around people who would shape them, and they would have a lot of options,” he said.

Beyond his family reflections, Springsteen also reminisced about his first-ever gig in a college town in Pennsylvania, where he opened up for Cheech and Chong after he released his first album. “I came out and we played about five songs,” he recalled. “I thought it was going really good. I was sitting at the piano and somebody tapped me on the shoulder and said, ‘That’s enough.’”