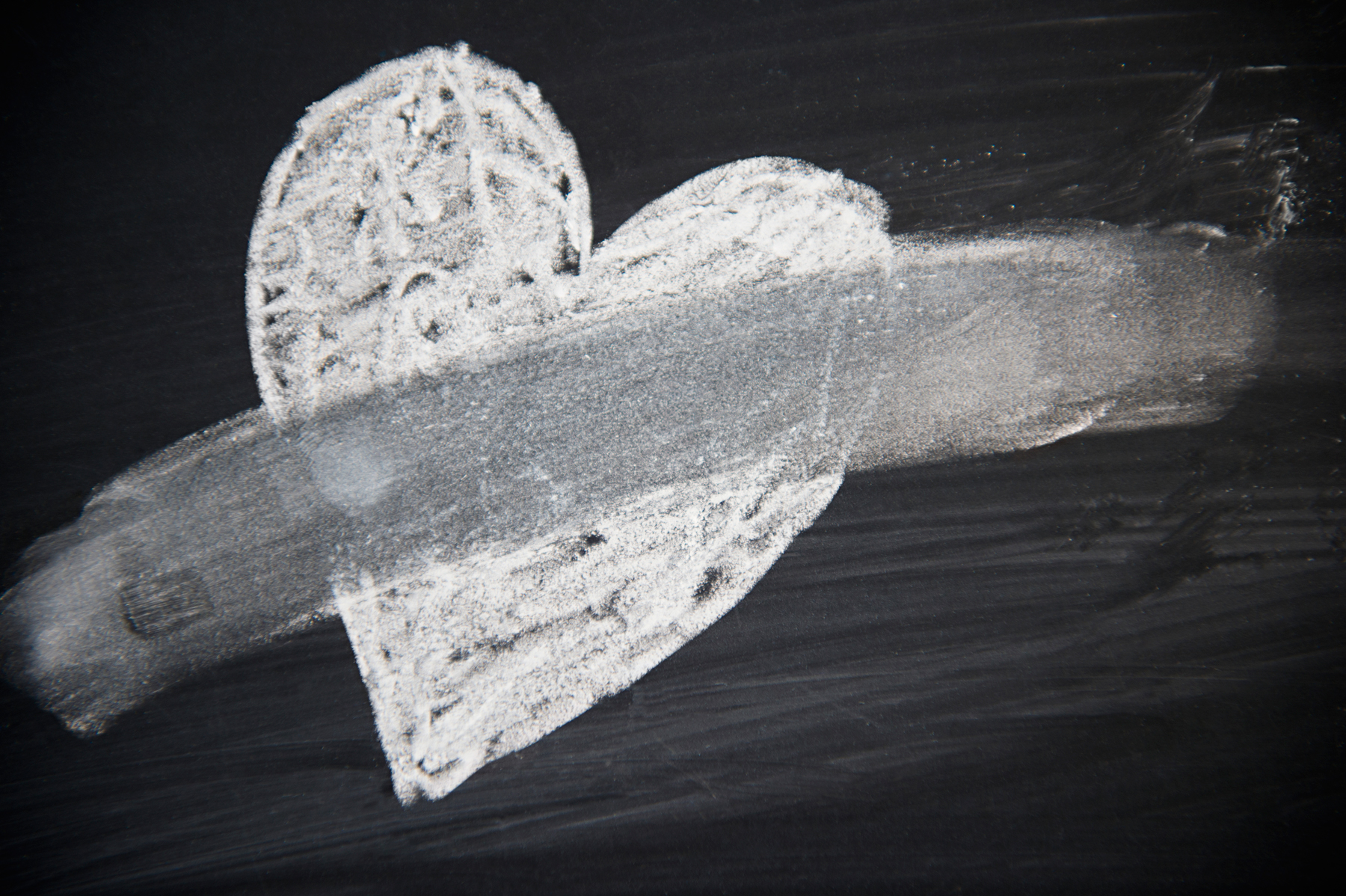 Looking to craft the perfect Valentine’s mix for your beloved? Be sure to steer of clear these romantic cheddar bombs, all of which give love a bad name.

Chris de Burgh, “Lady In Red”
It’s kind of fitting that this song was a hit in 1986, the height of the greed-is-good, conspicuous consumption Eighties; it’s the ultimate trophy-wife ballad (barely edging out Eric Clapton’s “Wonderful Tonight”). The fake-glitz muzak sound is perfect for a cheaply sentimental song about a guy whose appreciation of the woman beside him seems to work in direct relation to how many other guys hit on her at a party. Then again, Google Image yourself some Chris de Burgh and you too may wonder why the Lady In Red was dancing with him at all.

Joe Cocker, “You Are So Beautiful”
Allegedly dashed off by Beach Boy Dennis Wilson and fifth Beatle Billy Preston at a party, this song makes you wonder what those two were huffing. A longstanding punchline for exaggerated sitcom courtship routines, it strings its clichés – “a guiding light in the night,” “heaven’s gift to me” – around a title refrain qualified by “to me,” like the shameless singer is hedging his bet. Joe Cocker gives it his best spazzy Ray Charles croon. But we’ll take the Cows’ sludge-metal desecration any day.

Elton John, “Can You Feel the Love Tonight”
Erm, no, actually. Maybe if you’re one of the animated big cats in The Lion King, the Disney film Sir Elton penned this cornball ballad for. “It’s enough to make kings and vagabonds/believe the very best” he croons. If you say so, Reg. The rest of us believe this could be your all-time cheesiest moment.

Extreme, “More Than Words”
With their Rapunzel hair and chiseled cheekbones, you wouldn’t kick Extreme out of bed for eating crackers. But you might kick them out of bed for being assholes. “More Than Words” packages metal-creep chauvinism in sensitive acoustic shrink-wrap. “‘I love you’ is not the words I want to hear from you,” they sing. What is the words they want to hear? How about something along the lines of fuck me. Just don’t say it with your mouth. Say it with your passive, wordless compliance.

One Direction, “Little Things”
On this acoustic valentine (written by Fiona Bevan and Ed Sheeran), the teen-pop gods congratulate themselves for loving you despite your manifest imperfections. Harry Stiles sings: “You never want/To know how much you weigh/You still have to squeeze into your jeans/But you’re perfect to me.” Well, not perfect perfect. More like, ya know, fat. Harry, your depth frightens us.

Dave Matthews Band, “Crash Into Me”
Dave Matthews has always had kind of had a sex-panther side, and there’s nothing wrong with that. But his most popular love song obliterates the fine line between sexy and icky. The melody is pretty, the passion undeniable, the vocals fragile and hopeful. But when he sings, “hike up your skirt a little more and show your world to me,” he suddenly flips from sweet singer-songwriter to pervy happy hour stalker. Hey ladies, on the way to the parking lot, don’t forget your mace!

Phil Collins, “Groovy Kind of Love”
A hit for British Invasion band the Mindbenders in 1965, “Groovy Kind of Love” was a sweet, slight Brill Building pop ballad. Collins must’ve have thought he was adding seriousness and sophistication by replacing the original’s buoyant innocence with a stolid delivery and weirdly lachrymose, painfully Eighties synths. But all he did was give a groovy little song a full-on grooviness enema.

Bad English, “When I See You Smile”
When Journey went on hiatus toward the end of the Eighties, keyboardist Jonathan Cain and guitarist Neil Schon formed Bad English with John Waite of the Babys on vocals – and went on to achieve levels of cheesy terribleness their other band had barely approached. No blow-dried power ballad ever did it bigger, dumber, emptier or gloppier than “When I See You Smile,” a love letter to a girl who never forgets to bring an umbrella along on dates (“And when the rain is falling, I don’t feel it ’cause you’re here with me now”). Waite’s herniated vocals make Steve Perry sound like Al Green.

Celine Dion, “My Heart Will Go On”
Kate Winslet recently admitted that Celine Dion’s monstrously popular theme song from Titanic makes her “feel like throwing up,” and even Dion herself didn’t want to record the song when she first heard it. Hearing that misty, leprechaun-tinged flute intro is sort of the polar opposite of hearing the opening chords of “Satisfaction” or the snare hit that starts “Like a Rolling Stone” – instant recognition followed by immediate terror.

Jim Croce, “Time in a Bottle”
A sugar-crusted, plinky-plonky slow waltz in which the singer would like to “save every day/’til Eternity passes away/just to spend them with you” – and makes you feel that eternity crawling as you wait for the song to end. Unlike Croce’s “I’ve Got a Name,” which received a new lease on life in Django Unchained, not even Tarantino could redeem this one.

John Mayer, “Your Body Is a Wonderland”
Riding a featherweight groove with barely enough reggae bump to catch a second-hand buzz, this teddy-bear come-on tosses out greeting-card metaphors (“porcelain skin” is lazy, but “bubblegum tongue”? – c’mon, dude), then lapses into a fluff-jazz instrumental break that might put even Katy Perry to sleep. As midday hook-up anthems go, give us “Afternoon Delight” any day.

Stevie Wonder, “I Just Called to Say I Love You”
Stevie Wonder has always had a taste for treacle. (All together now: “There’s a ribbon in the sky for our looove…”) But in most cases, his melodic grace and all-around musical genius redeems the schmaltz. Not so this 1984 smash, whose ticky-tacky rhythm track sounds like a Casio keyboard preset. Toss in the unfortunate lyrics, which range from laughably maudlin (“No chocolate covered candy hearts to give away”) to inscrutable (“No Libra sun/No Halloween”).

Bryan Adams, “(Everything I Do) I Do It for You”
“There’s nowhere unless you’re there,” bleats Bryan Adams, sounding like a cross between an asthmatic mountain goat and, uh, Bryan Adams. How true that was in the summer of 1991, when this soul-crushing theme song from Robin Hood: Prince of Thieves was inescapable, topping the charts worldwide. (Its 16 straight weeks at Number One in Britain was an all-time U.K chart record.) Bonus demerits for the video, which features many clips of Kevin Costner, looking dewy-eyed and “romantic,” and wearing tights.

Dan Fogelberg, “Longer”
Fogelberg told an interviewer that he wrote his biggest hit while lying in a hammock in Hawaii “looking up at the stars.” “This song was drifting around the universe,” Fogerberg recalled, “and I decided I’d give it a good home.” Somebody – the stars, the universe – effed-up bad. “Longer” plays like a parody of a parody of sensitive singer-songwriter schlock, from The Folg’s wimped out vocals to its “poetry.” (“Mountain cathedral” rhymes with “forest primeval.”) The song clocks in at 3:15 but feels – you guessed it – much, much longer.

Jewel, “You Were Meant for Me”
Here are some things Jewel does in her 1996 folk-pop megahit: She paints a smiley face on her breakfast plate with egg yolks. She puts on her coat in the pouring rain. (Usually better to put on the coat before heading out, but no matter.) She consoles a cup of coffee. Yep, consoles. She puts on her “PJs.” She brushes her teeth and puts the cap back on. Who said romance was dead?

James Blunt, “You’re Beautiful”
“My life is brilliant,” declares James Blunt. Good for you, holmes, but your song is wack. When it comes to the squishiest unrequited love ballad of the 21st century, it’s tough to say what’s more annoying: the drama-queen stalker lyrics, the whiney vocal tone, or the syrupy melody. And that’s not to mention the ridiculous beefcake video, where Blunt strips in the snow and then jumps off a cliff – an act that might feel more tragic if it wasn’t shot like an underwear ad.

Seal, “Kiss From a Rose”
“A Kiss From A Rose” works its soaring, soft-soul magic by slamming together some truly epic metaphor mixology: “Love remained a drug that’s the high and not the pill.” “Did you know, that when it snows my eyes become large and the light that you shine can be seen.” Maybe Heidi Klum not being a native English speaker had something to do with Seal’s success wooing her.

All-4-One, “I Swear”
Originally a country hit for singer John Michael Montgomery, the became one of the biggest songs of the Nineties when All 4 One remade it as an R&B slow-jam. The melisma at the end is utterly out of control and there’s something odd about the distance between the youthful, puppy-love delivery and the iron-clad eternal promise of the lyrics: “for better or worse/Til death do us part.” Um, really? Death? Let’s see how junior prom goes and work from there.

‘N Sync, “(God Must Have Spent) A Little More Time On You”
That God, always thinking of Justin Timberlake and his specifications for dateable women. What a bro. Weirdly, though, ‘N Sync chose to honor God’s girl-making glory with this lilywhite, wafer-thin ballad, proof that the soulman deep down inside young J.T. was a few years away from assuming possession over his corporeal self.

Savage Garden, “Truly Madly Deeply”
With a Calgon, take me away synth-suds track, an aromantic classical guitar solo and the indelible poetry, “I want to stand with you on a mountain/I want to bathe with you in the sea/I want to lay like this forever/Until the sky falls down on me,” Australian pop duo Savage Garden oozed their way to the top of the charts in the spring of 1997. And the sky just refused to fall on it; “Truly Madly Deeply” stayed on the charts for 123 weeks. Stupid sky.

And just in case you want to listen to these 20 schmaltzy sweetheart tunes one last, terrible time, we made you a playlist. You’ve been warned.