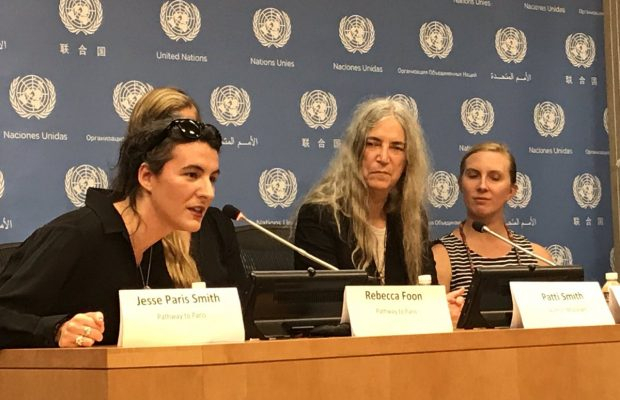 Patti Smith and her daughter, Jesse Paris Smith, headed to Rockaway Beach on New Year’s Day to celebrate the release of the latter’s first solo single, “Legacies.” A simple yet haunting track, the song kicks off a new project by the younger Smith’s climate action organization Pathway to Paris, a series of songs dedicated to positive change for the decade ahead.

“I was thinking a lot about students and the school shootings. … There were so many, so many names, so many forgotten souls, so many terrible stories,” Smith said of the inspiration for the song in a statement. “I went into my bedroom with my ukulele and wrote this song. There is a line that says ‘one should have been more than enough,’ and that is the line that is the most about the shootings. The whole thing is really just about the general idea of observing our behavior as individuals and collectively.”

Clocking in at eight minutes, “Legacies” is a spare affair, recorded in December at New York’s Electric Lady Studios. It opens with a quote by the late Carl Sagan that Smith said is about “reminding us of our responsibility to Earth and the cosmos above.”

The next song in the series will be “Drive to the Ocean” by Michael Stipe, set this drop January 4th, his birthday. Stipe released “Your Capricious Soul,” his first music since R.E.M.’s 2011 breakup, back in September. He previously debuted the song at a Patti Smith concert in May 2019. All proceeds from the 77-cent download will benefit Extinction Rebellion “to help aid their work of non-violent protest of government inaction to the climate emergency,” Stipe wrote on his website. The song’s release was tied to the “International Rebellion” climate justice protest, which took place in October.

Smith founded Pathway to Paris in 2014 with cellist Rebecca Foon to host events where artists and scientists discuss climate change.