The fashion world has entered an irony-saturated (post-irony?) era, what with all the Virgil Ablohs and the camp-lite celebrations and the “I Don’t Care” jackets. Adding to the fray is a new item from Vetements, an “Oversized Printed Cotton-Jersey T-Shirt” that rips off the one Kurt Cobain wore on the cover of Rolling Stone in 1992.

“Corporate magazines still suck A LOT!” the $550 item of clothing screams, its tone escalated by the anarchist symbol printed in the phrase “A LOT!”, itself an addition that never appeared on Cobain’s original T-shirt. 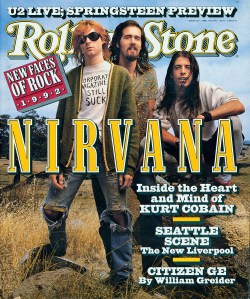 Nirvana on the April 16th, 1992 cover of ‘Rolling Stone.’ Photograph by Mark Seliger

“In 1992, it was Mr. Kurt Cobain’s way to thumb his nose at the establishment from the cover of Rolling Stone – ‘Corporate magazines still suck’ – and in 2019 it’s Mr Demna Gvasalia’s way of doing the same from the Vetements runway,” reads the editor’s notes. “This cotton-jersey T-shirt features the statement with an addition of an anarchist symbol, and was included in the ‘Anti-Social’ portion of the show.” (If you’re wondering, the shirt fits into the theme of Vetements’ Anti-Social fall/winter 2019 collection by equating anti-social behavior with, erm, government surveillance and the Dark Web. And yet none of the models wore Anonymous Guy Fawkes masks.)

Not to parrot what smarter fashion writers have pointed out about, say, Dior slapping “We Should All Be Feminists” on a $850 tee, but turning Cobain’s political demonstration into a product both naively misses the point and savvily meets a corporate bottom line. The company is looking to make bank, not change, whether performatively or not; if it were really preoccupied with activism, it’d be addressing the widespread internal problems within the industry, like underpaid garment workers and hazardous working conditions. Kurt Cobain is a nice shorthand for rebellion, but don’t expect to see “This Shirt Was Made Below a Living Wage” on a clothing rack anytime soon.