Early one evening last month, in a charming countryside house about an hour or so away from the U.K. headquarters of Bowers & Wilkins, the 53-year-old performance audio brand was beginning to find its way again.

Set among an idyllic British landscape of grassy knolls and tall trees and pools of water still rippling from a rainstorm the night before, the brand was presenting for the first time its new lineup of products, inspired by its storied past, but with sights set firmly on the future.

The brand’s new CEO, Gregory Lee, who had come over to Bowers & Wilkins from Samsung just six months earlier, stood in front of a small group of journalists and publicists who had assembled in the living room of the chateau-style 1850s property, and declared that the company was unveiling “the newest and most technologically innovative line of wireless products our development team has ever created. We are,” he said, “setting a new bar in the world of wireless sound.”

It was Bowers & Wilkins speakers that engineers at the famed Abbey Road studios in London relied on to mix the score for many of the movie world’s most famous soundtracks, including, most recently, the score for Mary Poppins Returns. The luxury car company, McLaren, meantime, whose vehicles are all made to order and run into the hundreds of thousands of dollars, chose Bowers & Wilkins to outfit its audio systems. And artists from the worlds of rock to jazz to pop have all raved about their “B&W” equipment, whether they use the brand’s legendary speakers for their home theater systems, or own a pair of noise-canceling headphones for recording and listening on the go.

But while the venerable brand had more than proven itself in the audio world — indeed, ask most audio reviewers and enthusiasts and they’ll tell you that Bowers & Wilkins makes some of the most reliable and dynamic speakers in the market — it was perhaps craving something that many of its competitors had more off: buzz. 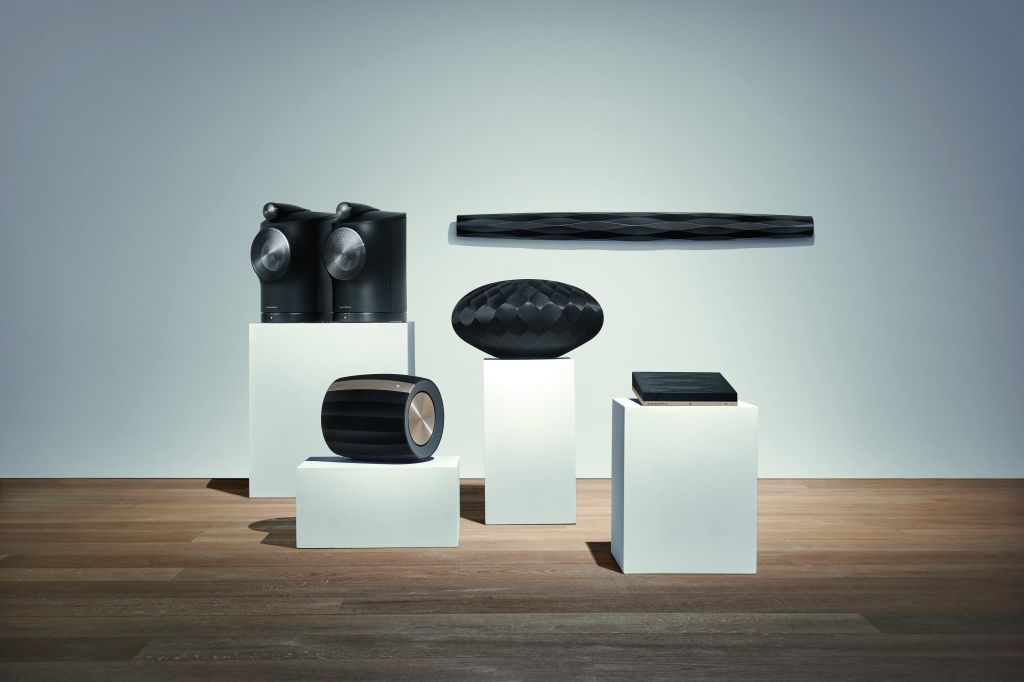 Lee, who says he’s been a music fan for as long as he can remember (the first album he bought was Elton John’s “Captain Fantastic and the Brown Dirt Cowboy” in the sixth grade), was hired last November with the goal of helping the company step firmly into the future. It was a move that many in the industry saw as a gamble, but last month, Bowers & Wilkins finally showed its hand, with the launch of its “Formation Suite” of five, wireless home audio products, which promised to blend enhanced, high-fidelity performance with modern conveniences, and a contemporary aesthetic. Critics were almost unanimous: for the U.K. company, it was a royal flush.

“Whether you’re listening to jazz, or Elton John, or Madonna, the most important thing is the music, not the equipment,” Lee says. “Which means that live music is better than recorded music, because you can hear someone perform up close and you can see them sweat and you can feel their energy. But if you can’t have that,” he explains, “then you take the replica [recorded album]. And then you have to consider how good the source is. You want to be able to hear the music crystal clear, as if you were there. That’s the experience we want to provide.”

The Formation Suite launched with five products, including the display-worthy Formation Duo, a pair of carbon-domed wireless speakers that delivers incredibly rich, rounded sound in a chic, sophisticated package. The speakers pair seamlessly, with no lag time between them, and with a full range of sound across the different frequency ranges. The carbon dome tweeter delivers crisp, clear trebles, while the brash, powerful bass really shakes a room when turned up.

The Duo features the same Continuum cone driver found on the company’s acclaimed 800 Series Diamond speakers, pulling out every note and nuance of a track (I.e. not just a drum beat, but the delicate swishing of the drum brushes creating that beat). The goal, Lee explains, is for you to hear the production the way an artist intended. Purchase: $3999.98 on BestBuy.com. 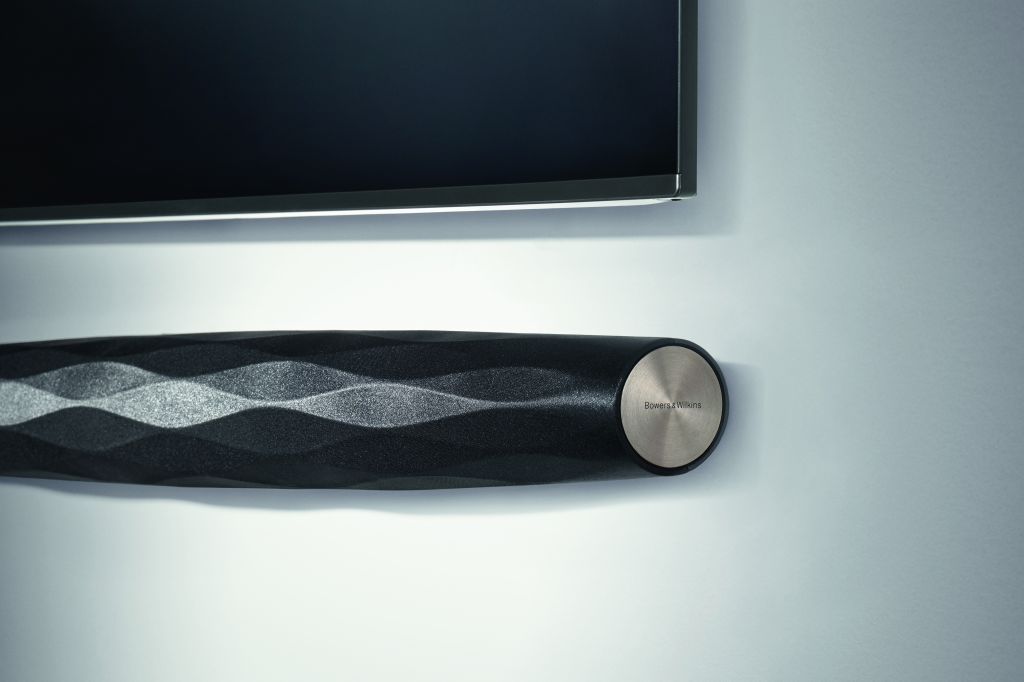 Bowers & Wilkins’ new Formation Bar, meantime, is a soundbar with nine optimized drive units, providing a wider soundstage for your home theater system. Placed strategically in your room, the Formation Bar delivers cinema-worthy sound that picks up on every crumb of dialogue or special effect from your favorite shows and movies, from a hushed conversation in a crowded club, to the rumbling of an engine just before a car chase scene. Purchase: $1199.98 on BestBuy.com.

Other new releases include the bookshelf or cabinet-ready Formation Wedge ($899.98), which delivers full-range stereo sound in a unique 120-degree elliptical speaker shape, and the Formation Bass ($999.98), a powerful subwoofer that delivers depth without distortion, outclassing other units in its field thanks to its unique cylindrical design.

Lee admits the price range is “expensive,” but says the company “wanted to come down from the top instead of starting low and moving up.” Comparing the new Formation Suite to Porsche’s launch of the Cayenne (“It allowed a bunch of new people to experience the Porsche without having to get the Porsche 911), Lee says audiophiles and “tech-oriented” customers will appreciate the discernment and craftsmanship that the company has put into the new offerings.

“We are approaching this from the best quality perspective,” he says. “Listen to the quality of the sound. If you care about sound, gives Bowers & Wilkins a try.”

Across the pond, just a few miles from Bowers & Wilkins’ American headquarters in Menlo Park, the audio company, Beats, was making some waves as well. After years of dominating the industry — at least in terms of brand recognition and “it” factor — with its Beats by Dr. Dre headphones, the company last month introduced its first foray into the wireless earbud market. 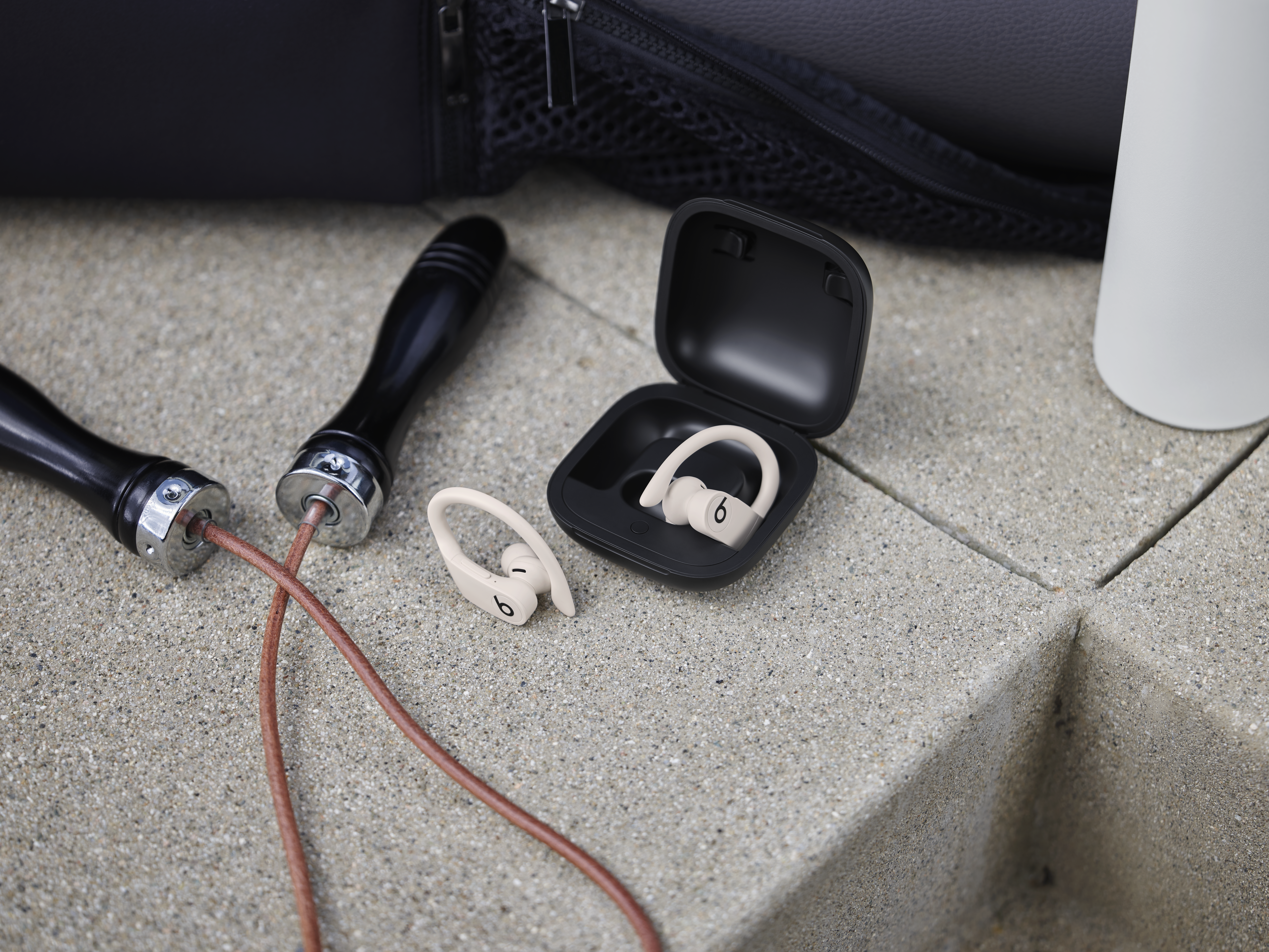 The “Powerbeats Pro” wireless earphones are the result of a years-long project between Beats and its new owners, Apple, resulting in a pair of buds that promise industry-leading battery life, advanced functionality, reliable connectivity, and a better, more ergonomic fit.

Beats says the new earbuds, available at Apple this month, were designed to meet the needs of its consumers, who liked the look and feel of its Beats by Dre headphones, but needed something more versatile, portable and untethered. 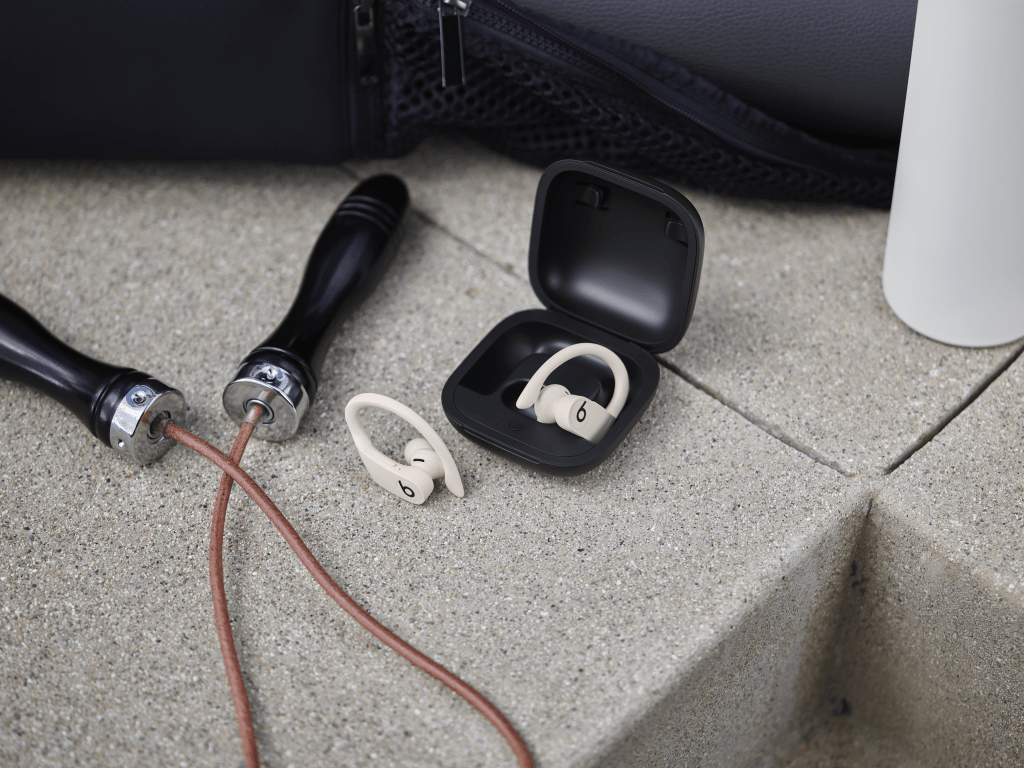 While Beats has always bested brands with its marketing and aesthetics, critics have called out the lack of progress with its sound. That’s why the company says their first task with the Powerbeats Pro, was to tackle the sound capabilities of a tiny pair of buds. The result: the new earbuds feature an upgraded linear piston driver that delivers a more controlled airflow, resulting in a more powerful acoustic response. Users will hear less distortion and better dynamics across all lows, mids and highs, and the sound will come through loud, crisp and clear.

Beats worked hard to improve its battery life too, and the company says the new earbuds will get up to nine hours of listening time and more than 24 hours of combined playback with the included magnetic closure case. Users will get 1.5 hours of playback with just five minutes of charging, and up to 4.5 hours after 15 minutes in the case.

As for fit, the company says over 20 models were physically tested on different ear and head shapes, to ensure the most stable, secure and comfortable fit. The new buds feature an ergonomically-angled acoustic housing that nests comfortably in the concha bowl of the ear with an off-axis nozzle, making for a more natural placement. And if you need to further customize the fit, each pair of earbuds comes with four sizes of ear tips and an adjustable earhook. 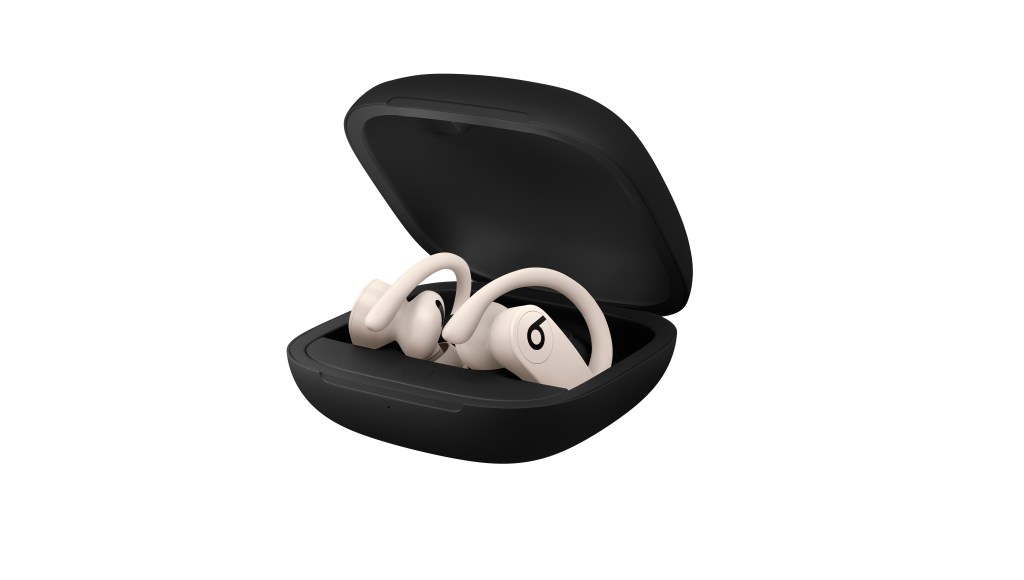 The new earphones are “a harmonious blend of premium sound, fit and functionality,” says Luke Wood, president of Beats, in a release. “Powerbeats are already the #1 fitness headphones in the world and they are now untethered, with all the benefits of the Apple H1 chip,” he continues. “No longer do you have to choose between performance and practicality — it delivers the best on both fronts.”

What we like: the earbuds are sweat and water-resistant, which make them great for the gym. The Powerbeats Pro were also designed with an ambidextrous design, letting you control your settings on either earbud – and with either hand. A “speech-detecting accelerometer” in each earbud, meantime, and two microphones per side, help the buds hone in on your voice when making calls, so your messages come through loud and clear, while also playing down external ambient noise.

While fans of the brand have expressed their excitement over the new wireless earbuds, it remains to be seen if picky audiophiles will jump on board. Still, for a brand that many have accused of coasting on name recognition and branding alone for the past few years, the launch of the Powerbeats Pro is proof that Beats — like Bowers & Wilkins — is serious about sound.

The Powerbeats Pro is available in black, ivory, moss and navy. Retailing for $249.95, the earphones will be available for purchase beginning in May on Apple.com.

Editorial products are independently selected. If you buy something from our links, PMC may earn a commission.